The Animal Welfare Committee would like to remind you to spay and neuter your pets, to cut down on the number of unwanted dogs and cats. Please adopt from the shelters; there are lovable and adorable pets there, just waiting for a home and family. If you lose your pet, check the shelters, because they often get taken there as strays.

TO SEE AGENDAS, MINUTES, AND DOCUMENTS FROM ANIMAL WELFARE COMMITTEE MEETINGS, PLEASE SCROLL TO THE BOTTOM OF THIS PAGE.

16.  Discussion and motion: The TNC Board approves the Executive Committee’s recommendation to oppose the June 26, 2020 LAAS proposal (http://www.laanimalservices.com/wp-content/uploads/2020/07/Proposal-for-WV-Shelter.pdf ) as follows:

Whereas the Los Angeles Animal Services (LAAS) Department’s draft Proposal dated June 26, 2020 to turn the West Valley Animal Shelter into a privately run Community Resource Center would result in significant loss of City services for the people and animals of the West San Fernando Valley; and

Whereas it would result in overburdening the only other city animal shelter in the Valley, the East Valley Animal Shelter; and

Whereas it would be inequitable because the entire burden of the LAAS budget cut is being visited on one area of the City, the West Valley; and is overwhelmingly opposed by the residents of the West Valley and the City; and

Whereas there are alternatives to the draft Proposal that would maintain the West Valley Shelter as a fully functioning municipal shelter.

This resolution is based upon public comments made at Tarzana NC meetings and other meetings, which are set forth in the following:

One suggestion that I thought was particularly noteworthy: Rather than having the entire budget cut fall on the West Valley Shelter and most municipal functions being shut down at that one shelter, all six City Shelters should share in this burden. For example, a percentage of kennels (possibly 10 to 15% of kennels) at all six shelters could be turned over to rescues, rather than turning over 100% of the kennels at just one shelter, West Valley.

There are some other good suggestions in the attached documents, as well as a summary of the 14 most commonly voiced objections to the current proposal.

SAVE A DOG’S LIFE OVER THE 4TH OF JULY HOLIDAY

Dogs are very fearful of fireworks.  Please make sure that your dog is secure during the 4th of July period, as dogs often run away when they hear loud noises like fireworks.  Please check your yard to make sure there is no way for your dog to get away.  And on the evening of the 4th, if you are out at a fireworks display, it is best to keep your dog in the house so there is no chance of it running away. The same is true of cats and other animals.

Los Angeles City Animal Shelters receive a large temporary influx of dogs (and to a lesser extent cats) over the 4th of July period.  This influx starts in late June, when people start setting off fireworks.  Citizens who find run-away dogs, as well as City Animal Control Officers who catch them, bring them into the Shelters to care for them.  Most of these animals are redeemed by their owners within several weeks.  But while they are at the Shelter, they occupy a kennel, which can cause overcrowding at the Shelters.  In the past, if the Shelter became overcrowded, dogs would be killed to make room for these new dogs coming in.

There is a “Temporary Animal Foster Parent Program” at the West Valley Shelter, to prevent the killing of any healthy adoptable dogs over the 4th of July period for lack of space. Members of the public will be able to foster a dog (or cat) in their homes for several weeks during the 4th of July period if kennel space is needed.

If you are interested in becoming a Temporary Animal Foster Parent Volunteer, please fill out the application which can be found at: http://tarzananc.org/docs/1412-1503.pdf     Send your completed application, along with a copy of your driver's license, to [email protected] If your application is approved by the Los Angeles Animal Services Department, you will be placed on a list and will receive an email from the Shelter if there is a need for temporary fosters.  If you foster a dog and it ends up that you want to keep the dog permanently, you can go through the adoption process. Otherwise, the dog will be returned to the Shelter.

If you have any questions, you can contact the Tarzana Neighborhood Council Animal Welfare Committee at: [email protected] or use the contact form at: http://tarzananc.org/contact.php?admin_login_id=78

FURTHER UPDATE ON OSCAR THE WONDERDOG -- OSCAR WAS ADOPTED

Oscar was adopted by a family in Oregon on March 25, 2017.  He and his new family are very happy.  Thank you to Jeremy DeGuc and Rough Start Rescue for getting Oscar his new home.

UPDATE ON OSCAR THE WONDERDOG -- OSCAR WAS RESCUED

Oscar was rescued by A Rough Start Rescue on January 29, 2017, after being in the Shelter for more than a year and a half.  Despite his long confinement there, he remained a wonderful, friendly, fun dog.  We wish him all the best.  Thank you to Jeremy Zeth DeGuc, Lisa Ritz, and A Rough Start Rescue for rescuing Oscar.  And thank you to my fellow Volunteers at the West Valley Shelter -- Cathy, Paula, Mary, Susan, and others -- who helped make Oscar's long stay at the Shelter much better by taking him out for walks and play on the yard.  Thank you to Los Angeles Animal Services and the West Valley Shelter (Supervisors Sergio and Shawn) for not giving up on Oscar -- even well after a year in the Shelter, there are happy endings.  Here are some pictures of Oscar at the Rescue in Oregon.

THE ADVENTURES OF OSCAR THE WONDERDOG -- SAGA OF THE LUCKY 7

Do dogs have a special sense for other animals who need help?  And are dogs able to communicate this to their human companions?

On August 4th, seven 6 week old kittens were abandoned at a remote corner of the back parking lot of the West Valley Animal Shelter.  The kittens were left in a filthy cat carrier, covered by a shirt.  It was well over 90 degrees that day.  The kittens certainly wouldn’t have lasted long under those conditions.  Why would anyone dump the kittens there, rather than simply bringing them into the Shelter?

Luckily, Volunteer Cathy was walking Oscar, an 8 year old Staffordshire Bull Terrier, on that day.  Because it was so hot, Cathy took Oscar into the back exercise yard at the Shelter, rather than taking him for a walk around the block.  Oscar seemed to sense that something wasn’t right.  Cathy picked up on Oscar’s concern, and soon focused her attention on the cat carrier that was behind a fence, all the way across the parking lot.  There were no sounds coming from the carrier, and it was many yards away, but for some reason Oscar and Cathy’s attention was drawn to it.  They went to investigate, and to their surprise, found 7 kittens in the carrier, with no food or water.  Cathy initially thought they were dead because the smell was so bad. The kittens were covered in feces and had fleas.  When they moved, she realized they were alive, but absolutely starving and thirsty.

After a medical check-up, the kittens were immediately given water and food, and bathed.  They were angels during their baths, despite being scared; a couple cried once.  After they were all fed and cleaned, they quickly fell asleep.

The kittens became known as THE LUCKY 7, because of their miraculous discovery.  All of the kittens have been temporarily fostered.  But in a few weeks they will be available for adoption.

And what about Oscar, who was so instrumental in saving the lives of these seven kittens?  He just takes it in stride.  It’s just another day in the life of OSCAR THE WONDERDOG.  He simply wants a permanent home, so he can give a family the same kind of caring and love.  Oscar has been at the Shelter for over a year now, since July 22, 2015.  As it turned out, there was a reason he was at the Shelter all this time, so he could help save the lives of these 7 kittens.  But now it’s Oscar’s time. This hero deserves a loving home.  Let’s go all out to get Oscar the home he deserves.

THE RESCUE OF JAXZ

Jaxz spent his adolescence in the West Valley Animal Shelter, after he was admitted as a stray at the age of 6 months, in August 2013.  People took to him immediately because he was adorable and still a puppy.  But, because Jaxz had never had a real home or training, he didn’t know how to act around people.  Jaxz was designated a rescue dog, meaning that he had to be taken by a rescue organization rather than adopted by a family.

As surprising as it may sound, getting a rescue to take in a rescue dog is no easy task. But Stella, an employee of the shelter, and some of the volunteers, including Jeff Mausner and Doug Ross, worked with Jaxz to socialize him. After more frequent human interaction, Jaxz calmed down, learned to walk on a leash, and learned how to play with people, even engaging the volunteers in a game of fetch. 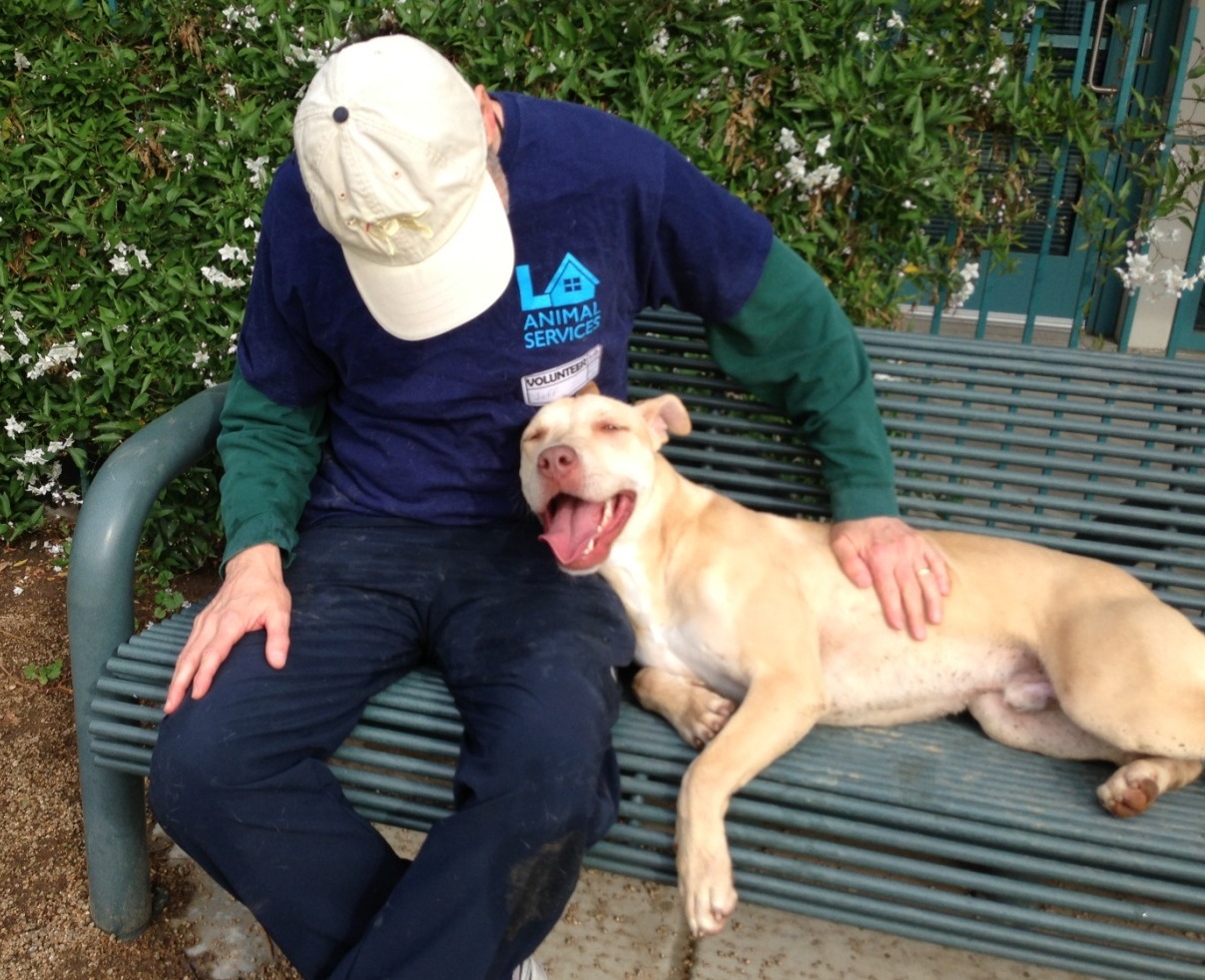 Employees and volunteers at the shelter worked with Jaxz. Jaxz and Jeff chill after playing fetch.

Several local rescues considered Jaxz, but all cited overcrowding as the reason for their inability to take him in. By February 2014, Jaxz had been in the shelter for more than 6 months, and if spaces at the shelter filled up, Jaxz was a candidate for euthanasia.  As March rolled around, things were not looking good for Jaxz and still, none of the rescues that had looked at Jaxz were prepared to take him.

That’s when Doug called Ady Gil, a renowned animal activist.  Ady is the executive producer of the PBS series SHELTER ME, founder of Ady Gil World Conservation, and co-founder of the rescue website ShelterMe.com.  Ady has provided funding and support to many rescue and humane organizations, allowing them to perform their work worldwide, saving animal lives.  He has been involved in the rescue and placement of thousands of dogs.  He also purchased the ship “Ady Gil,” which has prevented the killing of whales from Japan to the Antarctic sea.  Ady has also worked with governments to pass new laws to protect animals.  He has received numerous prestigious awards from animal organizations for his work.

Ady immediately went to work to save Jaxz.  He contacted trainer Toriano Sanzone, who runs WolfKeeperGlobal.com.  Toriano went to the shelter to evaluate Jaxz, and found him to be an affectionate, playful,  fun dog, who just needed some training.  Jeff donated some money for training Jaxz. 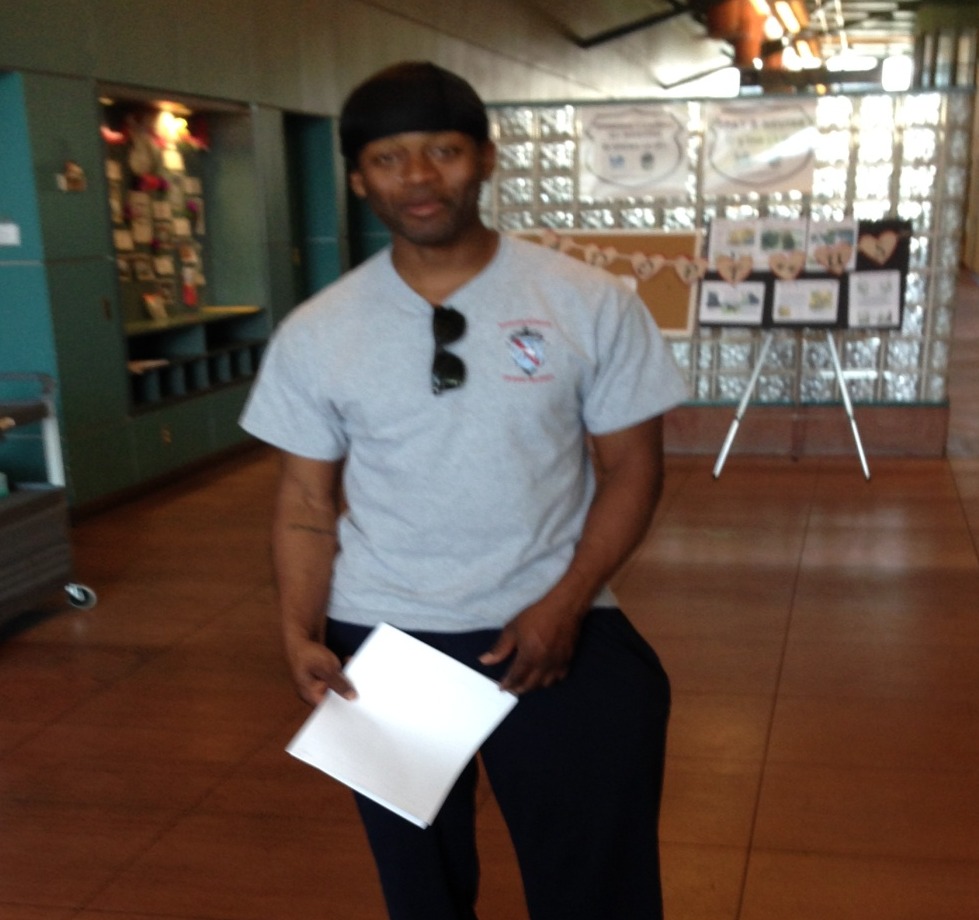 Ady and Toriano rescued Jaxz on March 20, 2014.  After training by Toriano, Jaxz

will be made available for adoption and finally find a home.  The life of a young dog has been saved.

Remember to spay and neuter your pets, to cut down on the number of unwanted dogs and cats.  Please adopt from the shelters; there are lovable and adorable pets there, just waiting for a home and family.  If you lose your pet, check the shelters, because they often get taken there as strays.

The Animal Welfare Committee conducts its business by reviewing and prioritizing agenda requests for Board action (generally either in the form of a motion or letter) or announcements submitted by stakeholders, governmental entities and other interested individuals and organizations. The Administrative Committee has the discretion to postpone an request, refer it to a specific committee for review and recommendation, treat it as an announcement or consider and resolve it as a non-Board administrative matter.

There are no Agendas uploaded for 2021